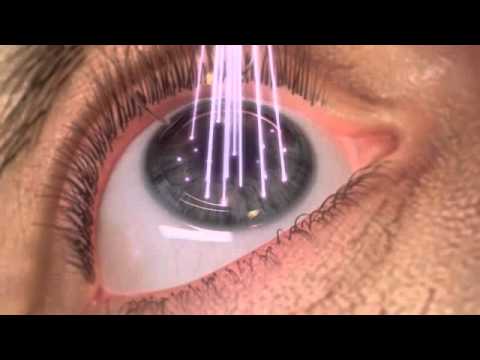 Laser vision correction surgery would not be possible without one of the most intriguing advancements of medicine, the excimer laser. Excimer is short for “excited dimer”. The laser is also sometimes called an exciplex laser (exciplex is short for “excited complex”). Here’s a detailed explanation of how this amazing laser works:

The laser uses an inert gas such as argon, xenon, or krypton in combination with a reactive gas such as fluorine or chlorine. Through electrical stimulation, an energized pseudo-molecule, the excimer, is created. The excimer laser emits a very focused beam of ultraviolet light that remains cool and does not heat surfaces or the environment around it. This makes it ideal for so many detailed procedures where temperature is a factor.

The excimer laser works by adding energy to the biological matter or organic compounds which absorb it, disrupting molecular bonds of the tissue at the surface. The laser penetrates less than a nanometer (one billionth of a meter!) into the target, versus burning or cutting. And instead of being burnt or cut, the surface tissue simply disintegrates through a process called controlled ablation (also known as excimer laser ablation or photoablation). Because of the precision and lack of heating, excimer lasers are ideal for very delicate procedures such as altering the cornea as part of LASIK eye surgery.

Regardless of which laser is utilized during the procedure, success and patient comfort ultimately derive from the surgeon’s expertise in use of the excimer laser for vision correction