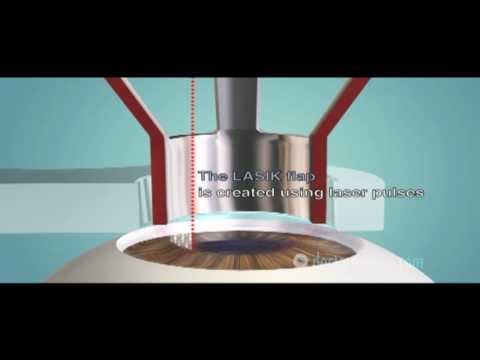 Lasik, or Laser-Assisted in SItu Keratomileusis, is a procedure designed to improve vision in those suffering from myopia (shortsightedness), astigmatism and hyperopia (farsightedness).

Lasik is a refractive surgery, performed by an ophthalmologist, which can be divided into three steps:

There are two ways in which the flap can be cut, being with a blade and with a laser and, when the Lasik procedure is carried out by laser, it is called IntraLasik or “Bladeless” Lasik.

There is no appreciable difference between the action of the blade in Lasik procedures and the action of the femtosecond laser in the IntraLasik procedures and both have their pros and cons. The Lasik procedure, however, sometimes resulted in irregularities in the cutting of the cornea, including improperly formed flaps, unattached flaps and partial flaps or could damage the eye tissue itself. It is highly unlikely for the IntraLasik procedure to create these kinds of irregularities, however, and some ophthalmologists will prefer to use the bladeless Lasik surgery for this reason alone.

Flap predictability, that is, how the ophthalmologist believes the flap will turn out, is also better with the IntraLasik procedure than with the Lasik procedure. One reason for this is that, with a laser, it is guaranteed that the flap will always have the same overall thickness while, with a blade, flap thickness varies depending on the curvature of the cornea. Overall, the bladeless Lasik has a reputation for creating flaps that are highly accurate as far as flap shape, flap thickness and flap size are concerned.

At the moment, there is no conclusive evidence as to which procedure has better results. Whether a patient’s defective vision is likely to show greater improvement after the Lasik or the bladeless Lasik eye surgery procedure will be largely determined on a case by case basis by a good eye doctor.

One thing is clear though, the patient will now be able to see the light.